So, Bill Clinton compared Obama's campaign to Jesse Jackson's  in 1984 and 1988, where Jackson attracted lots of support from the black community...

Well, what Bill didn't mention was that in 1984 and 1988, the Republicans won the presidency, beating Walter Mondale and Michael Dukakis, respectively.

Now, I remember those races. All I can say is that Obama is much more popular than Jesse Jackson was across a wide spectrum of America. I can also tell you that neither Mondale or Dukakis' campaigns had the level of overt racebaiting as Hillary Clinton's campaign... and yet effect of Jesse Jackson losing the party nominations in both 1984 and 1988 led to a dramatic increase in black voter apathy in the general elections, both for Michael Dukakis and for Walter Mondale.

So, if Bill is right, and Obama is like Jesse Jackson, who is Hillary Clinton most like? Michael Dukakis, or Walter Mondale?

Arguably, the best comparison is Dukakis... and from a demographic perspective, both Dukakis and Hillary Clinton appeal to the "Northeastern liberal establishment".  Arguably, the economy in 1988 was similar to today, with a huge deficit based on excessive military spending, that sparked a period of recession.

The general mood in the country back in 1988 was not particularly supportive of the existing Republican president, Ronald Reagan, in the run-up to the election. In February 1987, Ronald Reagan had a 44% approval rating, his reputation damaged by the Iran-Contra Scandal. Compare that to today, in which the latest SurveyUSA poll gives George W. Bush a 39% approval rating, climbing noticeably from his lowest levels, presumably because Republicans are starting to believe that Iraq wasn't a total disaster. It's reasonable and cautious to assume that George W. Bush's approval rating may climb back into the low-to-mid 40s as the general election approaches, especially if Iraq continues to have relatively low casualties or if he gives taxpayers a financial stimulus check, just in time for the elections. This, obviously, would make winning the national elections significantly harder for the Democrats to do.

George Bush, Sr. was running for his first term as president. A veteran pilot, in many ways he ran against Reagan's record, with the goal of a "kinder, gentler America." More of the same, but with greater consideration. Compare this to John Mccain, a veteran pilot, arguably far more charismatic than Bush, Sr., running in many ways against Bush -- more of the same, with greater wisdom -- with the goal of reform, small government, and supporting the military. The biggest difference between Bush, Sr. and McCain? John McCain has an advantage, in that he will be trying to run *AS* Reagan, rather than against him.

In May 1988, in the run-up to the general election, Michael Dukakis was on the top of the world, with a 49% - 39% advantage over George Bush, Sr. according to the New York Times.  Republicans were defecting to the Democrats, with 28 percent of those who said they voted for President Reagan in 1984 indicating that they preferred Michael Dukakis over Vice President Bush. Michael Dukakis chose Lloyd Bentsen as his Vice Presidential running mate, despite the fact that polls indicated that having Jesse Jackson as a running mate would increase his share of the vote by an additional 3%.

So, how did Michael Dukakis do on election day against a relatively uninspiring Republican leader, in the midst of a recession, after the final term of a relatively unpopular president? 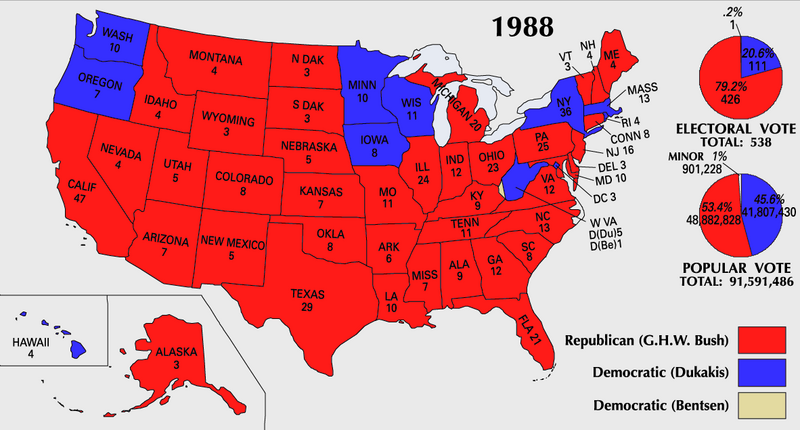 In the end, Michael Dukakis failed to deliver the black vote, and lost the race by nearly 6 percent of the national vote. Had he received an additional 3 percent or so of the vote, the following states would've been either in his favor or too close to predict: California, Connecticut, Delaware, Illinois, Maryland, Missouri, Montana, New Mexico, Pennsylvania, South Dakota, and Vermont. It is also extremely unlikely he would've lost South Carolina by a 24% margin.


But what about Walter Mondale, who ran with Geraldine Ferraro, the first female Vice Presidential nominee? Certainly, women voters would flock to her side, even if black voters didn't flock to Mondale, right?! 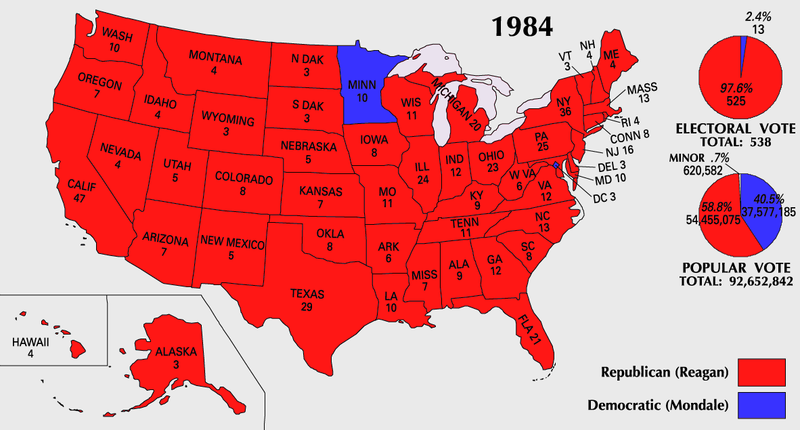 My point being? Black voters matter. Without them, it's very hard to win not only the southern states, but a whole lot of other states too, where black voters oftentimes make up the very thin margin between victory and defeat.  It's not pointed out very often, but blacks often tend to be more active in helping Democratic candidates win their campaigns, doing a lot of the phonework and the footwork that white voters oftentimes look down upon.

Despite all of Hillary Clinton's talk about how the black vote will rally around her if she wins the nomination, if history is any indicator, this is simply not very likely. In fact, the opposite is quite likely to happen, especially given the divisive nature of Hillary Clinton's campaign.

Lastly, it should also be pointed out that inspiring, unifying, charismatic leaders matter too. We don't need another Dukakis or another Mondale... and we can't afford another Clinton.