Although the television show 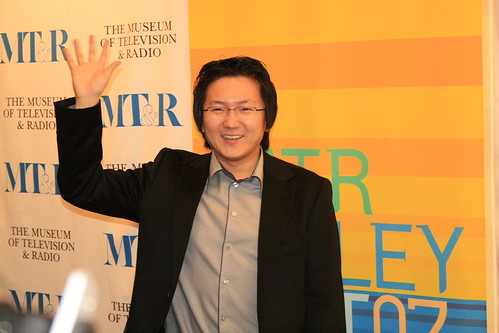 "Heroes"  has been praised for its deep storyline, character development, and near-flawless execution, it's worth noting that it has its rough patches, just like anything else.

Masi Oka, the actor who plays Hiro in "Heroes" , recently described his initial confusion when he read his character's scripted dialogue...

Oka's character, who has the power to stop / move through time and space, first discovers his power in the show's opening episode by staring at a clock and making its second-hand go backwards.

Well, in the script, it said that after achieving this small yet impossible feat, he was supposed to say "Bonsai!"...

Which, of course, means "little tree". As opposed to "Banzai", which is usually a group cheer, meaning "long life", in a context similar to "Vive el Presidente", or, in the most commonly known Japanese WW2 context, "Long live the Emperor!"

The actor didn't think that Tim Kring, the creator of the show, wanted him to yell "Little tree!" everytime he got excited, and he didn't feel that "Banzai!" was appropriate either, so he suggested that the line be changed to "Yatta!"... a Japanese word meaning "I did it!" that few Americans had previously heard, but which was more appropriate under the circumstances. Despite the public's lack of familiarity with the word, the change was quickly approved, and became the best known character catchphrase for the entire show.

Just goes to show that it's not always the initial design that makes something a success, but, as often as not, the ability for people to flexibly change and adapt that design.

It also shows that tweaks and changes to your initial design do not need to be shoehorned to fit into established standards, but can introduce something new that sets your design apart, connects with people, and gives your design character, while still remaining clear and accessable.