In the wake of their organized financial support for Proposition 8, a legal effort has begun to amend California state tax laws so that the Mormon Church, and all other transgressing churches, would lose their tax-exempt status if they lobby for state propositions in the future.

You can get involved and show your support by signing the petition over at : 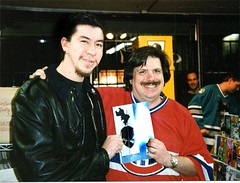 A bit of sad news... I just heard that Mark Buck died in a motorcycle accident.  Mark was *always* around the downtown, back in the days when I worked at KSJS, and through the time I helped run Underground Records.  Cafes, clubs... and he and the rest of Slave Labor Graphics were practically next-door neighbors at one point. I'd see him hanging out around the local taqueria oftentimes too.

I still miss downtown San Jose from back in the late '80s / early '90s... even though it's more developed and busy now, less happens that really seems creatively interesting. There were *LOTS * of creative and eccentric types back then, many of whom went on to do some pretty cool things. And best of all, most all of them were really nice, unassuming people... when you grow up in a city that is in the shadow of a more visible, apparently more creative neighbor to the north, you can afford to be a bit lamer, a bit less commercial, and a bit more eccentric than everyone else. And, surprisingly, that worked pretty well down the road for lots of us from that time and place.

I didn't know it until I read Dan Vado's LJ, but he went on to work in modeling and special effects, working on 'The Nightmare Before Christmas', 'James and the Giant Peach', the latest Star Wars trilogy, 'The Transformers'... and more. Damn.

I remember in the early days of Slave Labor, he came by KSJS, happy as hell about their latest creations... and dropped off a healthy stack of Milk & Cheese #1, 1st edition, and Pirate Corps #1... I still have one of each, but should've kept more... those things are probably worth something nowadays!

I heard earlier that they're having an F/X reunion over at the Blank Club on Fri. Nov. 28th which will benefit Mark Buck's family.  Mark used to go to the club on their more alternative night on Thursdays, like many of the rest of us downtown.  The night will feature a lot of the best local DJs from that time, such as my fellow KSJS veteran King Raffi, DJ Spun, Rick Preston, Harry Who... pretty cool, really, and a good way to help out his kids and maybe share a few old memories.

I want to go and might drag Iceblink to it, as I suspect she'd enjoy the music... and it's good to have an opportunity to see a few familiar faces, but it's a shame about the reason. (sigh.)
Collapse