I'm quite a fan of the erhu, even though I didn't previously know that was what it was called. The tone of the erhu seems intrinsically sentimental and wistful. I don't know what that says about me exactly, but I do appreciate evocative music.

Picked up a CD today from Jia Peng-Fang, simply called Erhu, which I overheard in a store. (Listen on Rhapsody.) The only thing that disturbed me about the album is that I couldn't figure out where I had heard him before. It took a bit of searching, but I finally found his website, which mentions that he performed on the soundtrack for "Princess Mononoke". Miazake must like him too. Kinda figures, really. 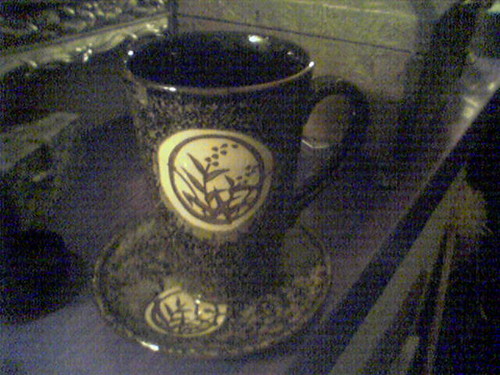 His music makes a lovely background for relaxed websurfing and sipping tea out of the nice new Japanese tea cups I also picked up, which, though it may be hard to see in the picture below due to the coloring, but they are a mottled black and brown glazed ceramic with matching saucer. They're also rather tall, handled, and muglike, which is good... The more tea, the merrier.

I love Japanese tea cups. There is something about having tea in a nice solid clay cup that makes everything special. I think it's how they hold and gently radiate the temperature of the tea... very comforting, really.

I bought a matching set of the cups. Tea is wonderful for silent contemplation, true... but is best shared in front of a winter fire with someone special, I find.