On Friday, the Belarussian government stormed the camp of the protesters, clearing square and arresting hundreds, apparently in a move designed to deny protesters access to the nationally symbolic area prior to a large scheduled protest on Saturday.

The arrests were followed by moving protests from parents and family members outside of detention centers, seeking the return of their children.

Saturday, the expected protest occurred, with many thousands of protesters facing off against over 1000 Belarussian security officers blocking access to the square. While the use of force in the most visible areas was somewhat limited, the gloves clearly came off in smaller confrontations. 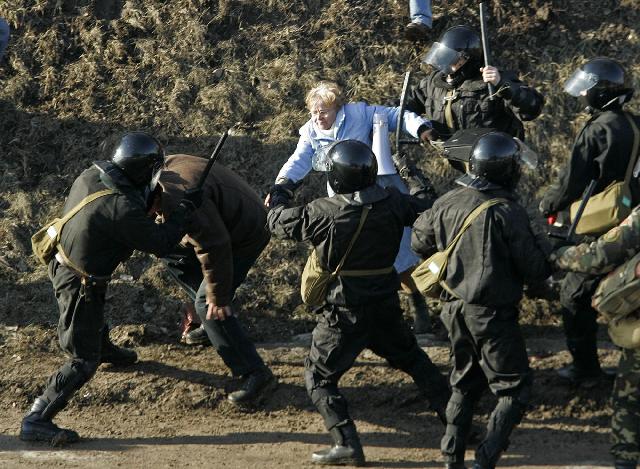 Some fairly well-heeled weblogs are starting to catch on that LiveJournal is an excellent source of information for global news, unfiltered and undiluted by the media. In addition to my typical sharing of this kind of information with Metafilter users, Global Voices Online relied extensively on LiveJournal users in Belarus for their recent report on the subject. Now if only more mainstream journalists would catch on, rather than parrot someone's talking points.

Many more photos documenting today's protest are available on

Between half a million and one million protesters marched today in Los Angeles in support of immigrants rights.

I agree with them. Let's stop criminalizing illegal immigrants... unless we're willing to do something about all those Irish first.

As one of those who is protesting these new laws said recently,

"“This is something that breaks up families. It forces educators like me to turn in my undocumented immigrant students and call them ‘criminals’. We’re shaping young leaders and organizers. They are not criminals.

The same thing goes for the elderly in my community – the Filipino community. These bills would force me to turn in my titos and titas (uncles and aunts) who are working and paying taxes. They are the foundations of the workforce in this nation, although they don’t reap the benefits of it. These bills would further drive them underground and force them to hide."

Why make teachers into criminals because they refuse to deport their students? Instead, remove the incentive. Criminalize the people who hire illegal workers with stiff penalties and actual jail time. Send the rich and exploitive to jail for five or ten years, and make the penalties so steep that the government could afford to hire a ton of inspectors, and you'll see illegal immigration die out reeeal quick.

Don't criminalize it. Regulate it. Allow employers to hire foriegn workers, so long as they can reasonably show that no qualified US workers have applied for the position, and then make the employers compensate the taxpayers for their worker's healthcare on every payslip, just like they do with taxes and SSI for the rest of us. Require that foriegn workers go through a lengthy, arduous procedure to become citizens. Put a picture and hologram on SSI and green cards, so that they're no longer a complete joke.

Of course, the end result is that produce and low-level service industry prices would probably go up somewhat, as consumers would be forced to directly pay for more of the hidden costs of cheap labor, but overall, the cost to the public should be less than before, with more income raised from those who hire foriegn workers. Likewise, allow additional taxes to be applied to foriegn cash transfers from non-US citizens working in the US, so that the states get their money back.

We need to stop believing that there's a free lunch with cheap labor. There's always a hidden cost. And, above all, we need to stop picking on the Protestants, French, Chinese, Irish, Vietnamese, Mexicans Americans of tomorrow, just because they came here any way they could, desperately fleeing from God-knows-what, with the belief that they could come to this country and find a better life. I, for one, still believe in them.

This is America, dammit!
Collapse